AND WHAT I NEED TO TELL YOU ABOUT IT. 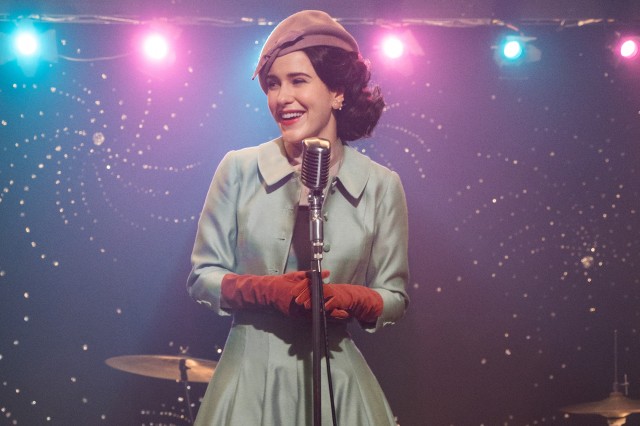 If you haven’t seen or, dare I even say… heard of her yet, where have you been?

It seems anymore that all I do is read my magazines, blow my nose, and watch the stuff that my magazines tell me to watch. Miraculously, one of my magazines recommended I watch The Marvelous Mrs. Maisel. And so, I did.

And I loved it.

I trust my magazines a lot because of this.

This show has won a lot of awards. And I can very clearly see why. Golden Globes, Primetime Emmys, Screen Actors Guilds… there’s a lengthy, long list.

There’s something about this show that makes it very different in its own rights. Actually, not just some thing… some things, probably. There’s a type of theatricality, if that’s right word for what I’m thinking of, a setting in the amazing 1950s (which, maybe, not everybody loves, but I sure do), and, for goodness sakes, a female comedienne!

I’m sure you can sift through hundreds of critics’ views on Google right now and just about all of them will go further in-depth with what actually makes this show work, why it’s so highly acclaimed, what physically makes it different/original… so I’m not gonna even start down deciphering that path. Instead, I just wanna share what I like about this show… and what I believe I’ve actually maybe learned from it. About writing.

Gather ’round and get out your ball-point pens, folks.

So, here’s a real kicker… I actually really like, or rather, really love comedy. It’s my favorite, I’m not sure that’s a secret, but I would figure it isn’t or shouldn’t be. So, really, any kind of comedy about comedy is, like, doubling it for me.

And I like comedic writing. Not sure how good I am with it, but I like to think I’m pretty marvelous myself. So, really, watching Mrs. Maisel’s stand-up routines is equivalent to reading straight comedic genius in my eyes. And you know how it goes; anything a writer reads a writer keeps. And then writes. Or… something like that.

Mrs. Maisel says something funny. The audience heaves with laughter. I giggle. A lot. Now… what was it that made that line work? And not just for the show… she’s performing a stand-up act; this routine would work (almost) anywhere. Was it the way she delivered it, the punchline itself, the sheer mechanics of it?

I have to figure this out on my own. And then, actually, I do seriously learn for it.

So, watching a comedic show about comedy makes me take away the pointers on comedy. I know, sounds complicated… but this is the main thing I’m trying to get at.

Now, fellow aspiring comedic writers, I would obviously recommend you join me on this journey of comedy-based analysis. Those fellows who may not be so interested in the genre of comedy even in the slightest… listen here.

Comedy is in everything. No, I’m serious (-ly laughing) about that. Even the things that we think need to be the exact opposite. The stories about horror, death, tear-jerking drama… just take a look at the good ones. What’s something surprising that they have that actually does make them work?

Hold on there, folks… it’s comedy.

The funny moments, especially in stories, makes them… I don’t know, real. Relatable. They remind us of our own humanity. People smile, people laugh. Stories are meant to reflect our own realities, and comedy is a part of everyone’s realities.

But, tangent off, back to Maisel.

Let’s work through an example together.

Midge (Mrs. Maisel) says this in one of her acts. First, read it and laugh. If you don’t laugh… well, then go read up on the history of world religions and come back later.

Love it, and it probably sounds even better heard on the TV in the living room than it does read here on the screen in my bedroom.

Now, read it again. And then ask yourself… what makes this work? Why is it funny?

And then read it again, if you think you need to, before I tell you the answer I’ve at least thought of…

It reflects our realities.

You know that old saying, or whatever it is, “it’s funny because it’s true”? Well, this is funny… because it’s true! Also, it’s probably presented in just the right way, it came up in the context of a stand-up act… that helps, too.

Now… what the hell was that?

I think that’s what Mrs. Maisel is (kind of) teaching me. And I think you can learn this from her, too.

Now, as the great Midge herself would say… thank you and good night!

Get a Free Novel

✿✿✿
Meet Mía 💜
Sooooo I kind of have a new book out??? Haha. Third in my "Emma Lenford" series, you can check it out (and the first two books if ya missed em) through my website--link in bio as always 💚
Happy birthday to this mostly unspecial pup with the very generic name--Bella! Even though she bites me quite often and leaves my fingers with multiple semi-permanent scars, I still cherish the rare nudge of her head on my hand when she wants some of my chips... Here's to putting up with her bipolar temper for 13 years!